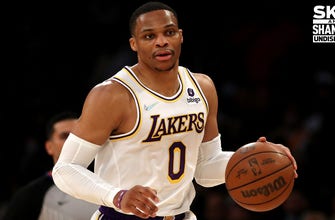 Russell Westbrook had a night to forget, finishing with just eight points on 2-of-14 shooting in the Los Angeles Lakers’ 125-116 loss to the Sacramento Kings. After the game, Russ wouldn’t admit to being in a slump, but did say he had to make more shots and also mentioned that the media wouldn’t be as hard on other players as they are on him. When a reporter asked about how the in-arena crew trolled him by playing songs like “Cold As Ice” when Westbrook was mentioned, the former MVP clapped back, saying quote: ‘Who? The arena? That’s funny. I hope they played that the last 14 years, too. It’s funny they were playing that. That’s cute.’ Skip Bayless explains how Westbrook is tarnishing his legacy.